In the First Session Maj Gen BK Sharma gave an overview of the Net Assessment (NA) which included Comprehensive National Power, National Security, Concept of Strategic Balance and Net Assessment terminologies. In the post tea session he discussed NA ‘Methodologies and Processes’. The Tools and Techniques used in NA was discussed by Dr Roshan Khanijo subsequently. 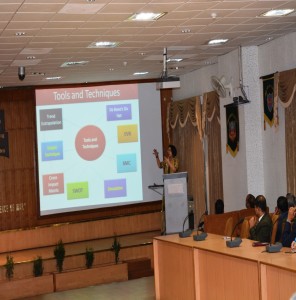 On the second and third day in an interactive session Gp Capt Sharad Tewari discussed the “Alternate Futures of South Asia”. Subsequently Pakistan was taken as a case study where drivers were identified and scenario building exercise was discussed. Maj Gen BK Sharma concluded the session by discussing the methods involved in formulation of National Security Strategy and he also discussed the key points of ‘Formulation of Approach paper on NSS for India’. Closing remarks and summing up was done by Lt Gen R Dhawan, COS, HQ ARTRAC.

The net Assessment capsule was attended by the officers from the training units of the Army from all over India. Each session had an interactive session where free and frank discussions were held.